Rocking through the ages

Rocking through the ages

I have been thinking about my grandmother recently.  She was widowed young and this makes me recognise how fortunate we are, as older women today.  We can travel and enjoy all of life in a way that she could not.  There were far stricter social norms for a single woman, whether widowed or divorced, in earlier times.  Even now friends describe how attitudes towards them change when they become widows, how men, in particular, offer unsolicited advice as if they are automatically incapable on their own and need protecting.   Even Sheryl Sandberg, the COO of Facebook, described recently how she lost confidence when her husband died suddenly and she found herself alone.  Neither career success nor wealth can protect us from the human experiences and interactions of everyday life.

Last week I went to an inspiring talk by Leah Thorn of www.loveolderwomenrock.wordpress.com at the Loose Muse women’s writers’ group in Covent Garden.  As always it was organised brilliantly by the inimitable Agnes Meadows who is certainly an older woman who rocks!  Leah’s poems were poignant, uplifting, funny and often subversive.  They were accompanied by her fantastic collection of clothes, shoes and jewellery embossed and embellished by her poetry and integrating the creativity of several women involved in the Older Women Rock pop-up shops and exhibitions she is currently organising.

Inevitably it got me thinking about what it means to be an older woman.  My mother, at the age of 82, used to describe to me how she felt 18 inside – until she looked in the mirror, or felt a twinge in a knee or hip, when reality would return.  This will be a common experience for both men and women of a certain age, I suspect.

And yet much as we feel the same person as we were when we were 18, the truth is that it is not just our skin tone that has altered.  Inside, on both conscious and unconscious levels, the building blocks of who we are have shifted position, changed shape,  grown and maybe deepened.  Whilst we may, as women, endeavour to smooth out all those wrinkles, the fact is that these wrinkles have painted the history of our inner experience on our faces.  The laughter or worry lines, the sadness, anxiety or mischief in our eyes, the happiness, amusement or depression that plays around our mouths.  Why do we feel it so necessary to wipe these out in order to please a society too strongly focused on appearance and so-called beauty?  I could name some very attractive older women who have done nothing to hide their life story from their faces and are all the more beautiful as a result.  In fact my old schoolfriend, the actor Dame Harriet Walter, produced a book of photographs on the subject of older women, entitled Facing It.  It is inspiring.

We do, of course, leave some things behind as we age.  I often catch myself looking at clothes that I would once have worn but have to accept would now neither fit nor suit me at the age of 66.  Equally, though, I do remember thinking, when I was about 33, that I was “too old” to wear jeans, which was obviously ridiculous as here I am still wearing them.  We can certainly pick up some weird ideas about the shoulds and should nots of getting old.  I thoroughly enjoyed having my flat in Nice, as the French ladies on the Côte d’Azure refused to get old and still strutted their stuff with panache on the beaches of the Promenade des Anglais.

So as I declutter my wardrobe in preparation for moving house,  I do feel nostalgic when I take some chic little number to the charity shop.  And sigh a little as I remember those wonderful clothes we used to wear all those years ago from Biba and Bus Stop.  I miss the covered buttons and long cuffs, the velvet, the puff sleeves, epaulettes, textures and colours of the 60s. And particularly, most particularly, my pale blue platform suede boots. 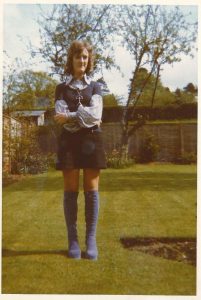 The attitude of society to older women can be rather depressing.  We have to stop ourselves believing the rhetoric as otherwise we can lose confidence, influence and status as we age.  We see fewer older women presenters on TV. Women talk of being invisible.  But, as at any age, it is what you are feeling inside that makes the difference.  Thinking of ourselves as invisible can be a self-fulfilling prophesy.

And then there’s money.  There was a moment around 1994 when I woke up to the fact that I needed to take more responsibility for making and saving money for my old age.  My co-author on Your Mind at Work, Richard Israel, recommended that I read a book called Smart Women Finish Rich by David Bach.  It opened my eyes.  There were case studies of women who had been ruined by making an assumption that their husband was managing their finances but then discovered they were up to the hilt in debt.  It was full of good advice about saving money.  We women can rock and roll and enjoy ourselves on relatively little cash – but hey, it is more fun if we have a little in the bank to make the choices that impact our lives.  And when one makes it oneself it feels even better!

The years have hopefully taught us something.  The idea of the wise woman used to be widely acknowledged and perhaps we need to reclaim some of that role.  Others don’t have to act on what we say if they don’t want to but sharing an observation we believe in can be helpful – even if it is politically incorrect.  But there is humility in wisdom, too, so it’s not about imagining we know it all.  The young generally know what is best in the context of their own lives and it’s their time to make some of the innovations and mistakes we inevitably made too.

I may have lost some of the fun choices I had when I was younger – the mini skirts, slim waist and flexible joints – but I feel that I have nonetheless gained some serenity.  At all stages of life, it is how one feels on the inside that counts.  Where we focus our minds influences our moods.  Thinking of ourselves as vibrant will give us a vibrant energy from the inside-out.  When I want to feel young and upbeat I listen to music from the 60s.  We have just been to see the musical Motown which reminded me of all those parties I went to in my teenage years.  When I get anxious I can choose to relax and enjoy the innocence of a grandchild, the random smile of a stranger, the joy of watching one’s children grow up with their own families.  And when I need peace I can focus my mind on the spring birdsong in the garden, or play some sacred music.  I’m also fortunate enough to have some great role models as friends.

And yes we did rock in the 60s and still do.  We were, in many ways, a lucky generation but we had our challenges and are certainly not the only generation to rock.  I hope we can blaze a trail for older women and encourage the television stations to continue to employ older women presenters.  With Theresa May and Angela Merkel out there demonstrating that women over 60 can represent their country on the world stage, there is some hope, whatever one’s politics.

Some poems on the subject on www.babyboomerpoetry.com

This site uses Akismet to reduce spam. Learn how your comment data is processed.