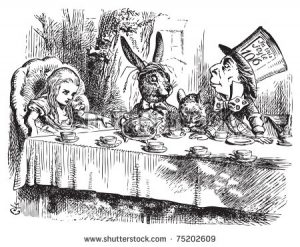 Listening to the news, on the Today programme this morning, of squabbling in the government, I began to feel I had woken up inside the Mad Hatter’s Tea Party.  Riddles, rudeness and incivility, along with pipe dreams of Treacle Wells post-Brexit, sounded remarkably like the Mad Hatter and the March Hare sparring with Alice in Wonderland.  I envisaged Philip Hammond as the Dormouse, finally waking from sleep and speaking up, only for the Mad Hatter and March Hare, in the form of Boris Johnson and David Davis, to plot to stuff him firmly back into his teapot.  Perhaps Jeremy Corbyn and John McDonnell will push them all aside with a cry of “Off with their heads!” Meanwhile, Theresa May, if she is Alice, takes herself off to a garden in Switzerland to escape the posturing.

It made me think about how our future in the UK, and the future of the world, is in the hands of besuited egotistical [1] men, and sometimes women, strutting their stuff.  And it makes me anxious.  Through history men have operated in hierarchical systems, each vying to be top dog and fighting those who challenge them.  It’s a win-lose game rather than a win-win game.  The stability of the world and its trade rests in their hands but narcissistic [2] leaders can and have caused havoc and worse in the past.

Some humility would be helpful right now, I think.  Some indication that our leaders are seeking ways to work together for the good of the world would be comforting.  But when I look at the reports of the negotiations in Brussels, or the latest news from Washington, Moscow, Paris, Hungary, Poland, the Philippines, North Korea or Turkey I don’t see much sign of it.  And it makes me remember the March Hare yawning and saying “Suppose we change the subject…I’m getting tired of this” .  And I feel like burying my head in the sand .  Certainly I find myself sleeping much better when I don’t watch the late night news.

Are those in charge thinking about their own position, pride, career and agenda or are they thinking what is best for the world?   Are they holding a focus on the needs of those millions of people they represent or are they just hungry for power?  Who can tell whether they all say what they mean or mean what they say?

Ego is an interesting drive one has to learn to manage.  Too little of it and one limits one’s life and what one might contribute creatively in the world.  Too much of it and it can do untold damage.

In the book Where Egos Dare, the Untold Truth about Narcissistic Leaders and how to Survive Them by Dean B McFarlin and Paul D Sweeney (Kogan Page, 2002), they define a narcissistic leader as having the following characteristics:

I am sure we have all met at least one narcissist in our own lives, and witnessed the damage they can cause to an individual, organisation or nations.  I find it extraordinary and disillusioning to realize that, having got this far through history and seen what such a leader can inflict on others,  we have not yet found a way to prevent them pushing their way to the top.  Is it wilful blindness or fear that inhibits peer groups of politicians and employees from standing up to the ruthlessness that characterises the way such people rise to positions of power?

So far, the threat posed by today’s rulers has been managed enough to prevent nuclear holocaust, though Kim Jong Un is intent on frightening those close to the borders of North Korea.  The problem is, as we can see with Donald Trump, that when one challenges them one can get hurt.  They are not easy to manage.  Rages, tirades and tantrums are part of the arsenal of an egotistical leader.  Divide and rule is a common behavioural response.  Sacking or alienating those who criticise them or do not agree with their policies gradually ensures that they are surrounded by sycophants.

I think that the institutions of government in the UK will hopefully protect us from a dictatorship or authoritarian leader.  I am less optimistic about other parts of the world.

And of course we all need to reflect, too, on our own ego and how we manage it.  In my work as a coach I found that the majority of those I worked with were battling self-doubt and needed to bolster their self-confidence rather than damp it down.  Some philosophers and psychologists state that the ego is always a destructive force but personally I think each of us needs enough of a sense of ourselves to have the courage and confidence to make the most of ourselves,  to express ourselves, to innovate and break through outmoded practices or create something new.

I find that people in the UK have traditionally been nervous of sharing their successes.  Teachers at school drum into us not to show off or bully and this follows through into adults who fear it is arrogant to tell others what they have achieved.  But, as ever, it is about balance.  You can surely talk of an achievement, and how you attained your goal, with modesty rather than boasting, and by doing so help others learn ways to achieve their own goals.

It is when someone brags and puts others down, insisting on higher status and rejecting any critical feedback that one realizes that such a person might benefit from being made aware how their behaviours impact others.  In the cases when I have worked with an egotistical person, male or female,  I concluded that they had little understanding of the feelings of others.  Indeed sometimes they did not care about others but at other times they found it difficult to put themselves in the shoes of those with whom they related.  Role-play exercises encouraging them to be at the receiving end of the behaviours they were meting out brought some insight.  Sometimes this worked to change their behaviour; other times the me-first behaviours were too entrenched to alter.

Looking back on my own life, I have, like all of us, learnt some valuable lessons about keeping my sense of self strong enough to be confident but not so strong as to be boastful.  I am conscious of the continuing need to be watchful of egotistical tendencies.   I became aware of having to manage my ego when I was running Positiveworks as I had to bolster myself up to stand up in front of successful professional people and imagine I could teach them a skill or help them develop.  I remember some excellent advice that I was given early in this career, when I mentioned a concern about whether I looked stupid, my hair looked a mess, or I wasn’t wearing the right business outfit during a training course.  My mentor firmly reminded me “it’s not about you!  It’s about the message you have to give.”  Brilliantly enough, this not only helped me move away from any narcissistic preoccupation but it also helped calm my nerves, as if you are focusing on the message you have no time for feeling anxious about how you are delivering it!

There’s another adjustment of ego I am finding, that happens when one retires.  A “who am I now?” moment – no longer a Managing Director, or a lawyer or doctor – and a moment to reflect on what this means in terms of identity.  Just a man or woman, a mother or father perhaps, a friend, a sibling, maybe a grandparent.  The status and position removed.  And so how does the ego adjust?  Often, I think, with some difficulty.  It seems to me a time to return to oneself without ego where possible, to accept one’s place in life and allow the younger ones to make the world their own but to share any words of experience or wisdom one might have gleaned over the years.  It’s probably my ego that’s writing this piece …  And right now I am looking forward to reading Alice in Wonderland to my granddaughter rather than watching the shenanigans being played out in the House of Commons.

This site uses Akismet to reduce spam. Learn how your comment data is processed.