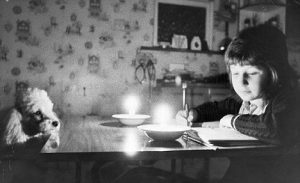 The miners’ strikes of 1972 caused power cuts around the country. With no coal for the power stations blackouts lasting nine hours were imposed plunging Britain into darkness.

The phrase “Everything has changed …” was a prompt for a 10-minute writing exercise in the creative writing course I am enjoying at The Avenue Centre, Kew, where they offer an amazing array of interesting courses.

Inevitably, in 68 years so much has changed but what came immediately to mind (and with only 10 minutes one has to go with what comes forward!) was how the Algarve area in Portugal has changed, and with it many other areas in Spain, Italy, Greece and beyond.

When I first went back to Portugal, having left Lisbon when I was 4 ½, it was 1968.  I was 18 and visited Lagos, which in those days was a peaceful fishing port.  I remember seeing women washing their laundry in the river and drying it by the river bank.  There were donkeys carrying produce from the market, women carrying water in ceramic pots on their heads, fishermen grilling fresh sardines on small barbecues on the pavement.  Life was poor and basic.

Today areas of the Algarve are full of tall hotels, tower block apartment buildings, bars offering cocktails and large screens to entice football enthusiasts, plus smart golf clubs.  It still  has marvellous beaches and warm welcoming people but the life has changed greatly.

This led me to imagine two different women who had lived through this change.  One who enjoyed the freedom that technology – a washing machine – had brought her, the other who mourned the camaraderie of the river bank and felt isolated and alone in her flat with her washing machine.  I imagined the latter missing the chatter of female friends, the gossip about husbands, children, grandmothers, and it made me think about how with every step of progress there is often something that we leave behind.

On sharing the pieces we had written with the rest of the creative writing class, we talked about what had changed in our lifetimes.  We particularly acknowledged the greater comfort in which most people were living now, that poverty as we describe it today is relative, when so many houses in our childhood did not have central heating, no washing machines, televisions, telephones, dishwashers, nor indoor toilets.  We remembered getting dressed in bed, or in front of a Dimplex heater, because the bedrooms were so cold.  We remembered how the glass of water beside our bed could sometimes have a thin sheet of ice on its surface.  We remembered how cars would frequently break down when you were trying to get somewhere.

Perhaps some of you watched the wonderful Andrew Marr programmes A History of Modern Britain?  https://www.bbc.co.uk/iplayer/episode/b007n1dx/andrew-marrs-history-of-modern-britain-3-paradise-lost The most recent repeat episode was set in the 1960s and 70s, a time when I was a teenager and young adult, and I was struck by how impoverished people appeared.  It showed film of the 3-day week, of factories closing, no electricity so we had to light our homes with candles, rationing of food as manufacturing was down.  Marr spoke of millions of days lost to strikes and of civil unrest.  It seems extraordinary, looking back at it.

It also made me think that everything can change suddenly as the next decade was quite different and the growing economy of the 80s opened up opportunities in business for those who were smart, whatever their background.  Class changed after the world wars but also through the decades from the 1960s when pop stars, footballers and entrepreneurial businesses created wealth for all types.  You only have to listen to the plummy voices of the BBC in those days to realize that life has, indeed, altered and that many of those at the top of industry and politics today are from all backgrounds where they would not have been in my youth.

And yet when we watched the programme A House Through Time, https://www.bbc.co.uk/programmes/b09pwbxf tracking the history of a house in Liverpool over several decades, the scenes from the 1980s were bleak – a kitchen on the landing, a shared bathroom on one floor, and a man who remembered carrying buckets of water up to his mother for the washing up.  None of this is so long ago.

Reflecting back over history, after the centenary of WWI last November and Holocaust Day last weekend,  made me think how lucky we are today to have peace, heat, light and reliable transport.  It comforted me to remember that things had been bad before, that people had been divided, and yet had come together again.  So hopefully we shall pull together through Brexit or no-Brexit or whatever-happens-next and create good times once more.

Something we didn’t appreciate about today’s world was incivility – the trolling on Twitter, the rape threats, the rudeness, the swearing that seems to have become commonplace.  I heard recently of a young teenager who wrote an articulate email to his MP about Brexit but then finished the letter off with “I hope you rot in hell”.  These phrases seem to trip off people’s tongues in a way they wouldn’t have done in the past.  Perhaps there was too much deference to authority in my youth and yet some kind of respect for others is surely part of a civilised society.  Today’s soaps and television series frequently include aggressive swearing.  I understand that Olivia Coleman in The Favourite swears like a trooper which a historian tells me is extremely unlikely to be realistic from the mouth of a female monarch.  Watching how pupils talk to their teachers in the TV programmes about secondary schools shocks me – we would never have dared to speak so rudely to a teacher!

I don’t know what we do about it but perhaps we can take the lead from the ‘broken windows’ policy where every small incident is noted and commented on in terms of what is and is not acceptable.  Generating a sense of gratitude for what we do have today can, perhaps, ease tension and pacify those teenagers who are anxious.

The problem is that if students don’t study history they don’t get perspective.  So often the only period of history that school children study is the Tudors and Stuarts.  If we could give them more information about our recent history they might realize more of what has been gained.

Perhaps we can elucidate them to the fact that even recently many people lived in severe poverty, that women were continuously pregnant because there was no effective contraception and that many of them died in childbirth or through illegal abortion practices, that so many children died of illnesses such as measles, whooping cough, scarlet fever, smallpox, polio (how is it that people are denying their children vaccinations when medicine has made such a phenomenal difference to childhood mortality?!), that antibiotics have helped cure so many previously deadly illnesses?  If they don’t understand recent history they can take for granted so much of what we do have at our disposal and simply not realize how lucky we are today.

Maybe sharing your own memories can open young minds to the experiences of their parents and grandparents’ generations and contrast what might, indeed, have changed for the better.  I wonder what you would write if you spent the next 10 minutes responding to that question “Everything has changed …”?