Our minds can divide us, our humanity connect us

Our minds can divide us, our humanity connect us

I have been wondering what exactly people mean when they use the term “foreigners” these days.  In my dictionary it is listed as

1.a person not native to or naturalized in the country or jurisdiction under consideration; alien.

2.a person from outside one’s community.

3.a thing produced in or brought from a foreign country.

I am not sure how the Government is currently defining “foreigners” when they talk about them.  I think Amber Rudd has a duty to be very specific in her terminology.  As someone who is British but was born outside the UK – in Portugal – does she mean that I might be defined as a foreigner?   The recent DNA test I had showed not only Anglo Saxon and Irish blood but also some percentage of North African, Middle Eastern, European Jewish, Italian and Greek.  What does that make me?

A recent survey carried out by Ancestry.com revealed that the average UK resident is 36.94 per cent Anglo-Saxon, 21.59 per cent Celtic and 19.91 per cent Western European, from regions in France and Germany.  Our ancestors surely travelled – for war, territory, love and religion so the concept of nationality is more complex than we might imagine.  But I think that what people perhaps mean when they talk of foreigners is people whose customs are different to our own.

The brain is programmed to identify a threat.  Way back when, our caveman ancestors would have sought to defend his tribe from any stranger that might have eyes on either his wife or his territory, or both.   I think it helps to understand that this is a basic human survival mechanism.  It would happen to any human being anywhere in the world when they perceive someone whom they perceive as a threat.  We don’t have to beat ourselves up about it but we do need to understand that as citizens of the 21st century we have choices as to how we manage and respond to these primitive survival mechanisms.

We recently went to the Revolution exhibition at the V&A which covers the demonstrations that were taking place in the 1960s supporting peace and equality, gay, women’s and black rights.  We may not think we have come a long way but believe me it is certainly better than it was then.  It may not be perfect but we do have legislation that attempts to protect these rights now and we have sought peace even if we haven’t been able to protect the world from dictators.

But my point in this article is that we can choose to see beneath the skin to our shared human condition.  As a coach I have had the privilege of having intimate conversations with people from all walks of life in many different parts of the world.  In these moments I have been struck again and again by how similar are the concerns of human beings.  People grieve at the death of a loved one, celebrate the birth of a healthy baby, worry about their bodies, their weight, their love life, their finance or careers. People are challenged by technological change and by work-life balance.  Stress has become a more prominent feature of consciousness everywhere I have travelled.

Our bodies and emotions are part of our shared humanity.   It is our minds that can divide us.  We have developed the habit of categorizing everything – animal, vegetable, mineral, gay, black, white, Muslim, Christian, Hindu.   This can be helpful but is often too binary.  Someone may have come from another country or religion and yet have very similar values and attitudes to us.  Another may not but they may both be placed in the same categorization pot by a newspaper, government or stereotype.   A train that is over-crowded does not categorize its passengers.  Whether they are striped or polka-dotted, the train is still either full or empty.  It is the human mind that judges and categorizes.

Within our shared humanity is the ability to analyse and choose our response.  The environment in which we live is continually changing.  We continually change within it.  Therefore some of the beliefs, expectations and thoughts that we have about who is like us and who isn’t may well be out-dated.  The model below is one I developed early in my coaching career to help people recognise that at any stage of life we can reflect on and change our conditioned and habitual responses: 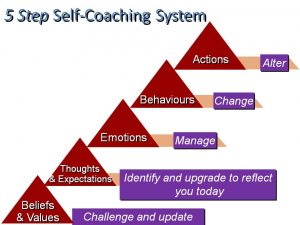 As a grandmother I hear my grandchildren talk about things in the same terms as their parents – whether this is about religion, literature, TV programmes or politics.  As young children they are inevitably dependent on their parents for survival and it is natural for them to do this.  As they become teenage no doubt this will change and they will rebel!  And yet you often find that people do maintain the same political and religious inclinations as their parents throughout their lives.  If the Dad is an Arsenal supporter then the sons are likely to be too – and will define themselves separately from a schoolfriend who supports Chelsea.  It is just as tribal as our cavemen ancestors.

We are facing a challenging time ahead on several fronts with Brexit, the possibility of Trump in the White House and with the upheaval in the Middle East.  This is surely a time when we need to be careful of our language when we discuss these problems and negotiate our relationship with the rest of the world.  People may not be keen on EU bureaucrats but that doesn’t mean to say that they don’t like Europe and the Europeans.  We may need to be wary of those who are out to do us harm but this does not mean that we have to be wary of all foreigners.  It is time for Governments, media and individuals to use words precisely.

For beneath the skin, whatever our colour and provenance, our hearts beat, our digestive system processes food and our lungs breathe.  We all suffer when we lose a loved one, laugh, dance, make love, worry about our children, wonder at the beauty of a sunset.  As we go forward perhaps we need to be more aware of how our minds have the potential to separate us while our shared humanity has the potential to draw us together to solve the world’s problems.  Or am I just being a 1960s Baby Boomer utopian!?