The journey from dependency to independence

The journey from dependency to independence

“By failing to prepare, you are preparing to fail” Benjamin Franklin

I wonder if you have ever spent a few days in hospital?  I have been in hospital for 7-10 days a few times in my life and have always been interested in how difficult it was to plan the simplest things when I came home.  What has always struck me is how, even after a very short time of dependency, one immediately loses the ability to think, problem-solve, plan and make decisions.   It can feel quite a relief not to have to think about small daily decisions such as what and when to eat, what to wear, what to do, how to spend or save one’s money, etc.  But lack of practice incapacitates us.  And just imagine how much more so if one has been in prison, in mental hospital, or the services for extended periods, where one’s life is organised by others.  How hard to adjust to making those daily decisions again.  How important to re-engage one’s executive brain and develop once more the ability to be independent of others and manage one’s own life.

It is not surprising that many ex-service people end up on our streets, homeless.  Nor that many mental hospitals and prisons become a revolving door where people exit but all-too-often return.  People do need help to plan their lives, their health, their work, their finance and their relationships.  It doesn’t happen automatically, particularly when you haven’t had to use that part of the brain for a period of time.   I believe the importance of planning skills is underestimated.   Without planning people have no route to success.

This applies in so many areas of life.  I was talking recently to a friend who works in a food bank.  The food banks were set up as an emergency resource but those running them are finding that some people can become habitual users of the service.  So some food banks now offer help with learning to budget and  take control of the small details of expenditure, so as to prevent the building up of dependency.

We have a great deal of personal debt in this country.  Something that happened less when I was young as there weren’t credit cards, and loans were hard to come by.  Our parents had come through the war and rationing so there was a strong message that one should budget and only buy those things that one could pay for.  Writing a cheque made it easier to calculate what was left in one’s account but few people write cheques these days and keeping track of what’s in the bank is much harder when you use a debit card.  What with compound interest, interest-only mortgages and working out the meagre interest on savings, it’s all so much more complicated now!  We need help.  Being in debt is miserable.  Getting out of it is tough.  Personally, I found the books and programmes of Alvin Hall helped me think about where my seemingly small daily expenditures were adding up and draining my ability to save.  I suspect many of us would benefit from reading his book You and Your Money.

You may have heard reports during the recent cold spell of how surprised people were that quite a large number of homeless refused the offer of a warm refuge.  It was too big a jump of trust and habit.  They know what to expect on the streets, however uncomfortable.  And they have often built up a solidarity of social life with others in similar situations.  Learning to socialise in new groups after being institutionalised or on the street is a major challenge.  Helping the homeless make the journey back to work and a life within four walls is more complex than it might sound and is a step-by-step process.

When I was running Positiveworks we were involved in a project with Business in the Community to help coach homeless women into the workplace.  It was through this work that I became aware of how difficult these women found even small decisions, such as working out when to leave in order to get to a job interview on time.  Maintaining the daily disciplines of time-keeping and planning was challenging for them.  They had lost the capacity to keep on top of things and could easily become overwhelmed by the number of things they had to think about.  We helped them to take a step back and consider the small steps they needed to take each day to gain employment and then to keep the job.  Each achievement built their confidence but it did not happen overnight.  Managing to return to the challenges of everyday life often took several months.

Just as parents move children from dependency to independence, we can often rather assume that the life skills of planning and decision-making are integral to humans but I found that when I used to coach teenage and adult students in revision-planning, few had been given any formal development in planning time, exams, or thinking about a future life or career.  These skills have to be developed, honed and practised.  As does financial prowess.  When I was managing company and personal accounts I realised, too, how easy it is to depend on one’s partner, business or personal, to manage money.  But then, aged 42, I read Smart Women Finish Rich, full of stories of women who had relied on others – often to their detriment!  It taught me that one must always take responsibility for one’s own financial position, even should one’s partner be an accountant!  It also helped me ratchet up my core beliefs about how much money I could make in business and how to plan for retirement.  Invaluable.

But the people who really need help are those whose lives have been disciplined by other people – teenagers growing into adulthood, those who have been in prison, in hospital, mental hospital, on benefits, or in the services.  When your everyday activities, including meal times, are organised by other people the part of your brain that does the planning deteriorates – and surprisingly quickly!

I have found that the four-quadrant template below, created from the Herrmann Brain Dominance Instrument, can be applied to provide a practical model for planning. 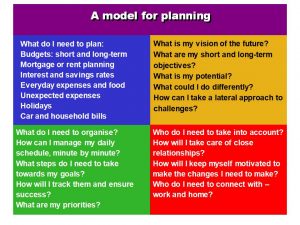 Once some or all of these questions have been answered, identify specific measurable goals and identify when they are to be carried out and achieved.  What is most important, though, is to ensure that the question ‘why should I bother to do this?’ is answered, as unless a person can perceive a tangible benefit and see a positive outcome for themselves they are unlikely to feel motivated to follow through.  I suspect we can all think of examples of goals we have set but without sufficient emotional will to complete them!

Don’t underestimate how useful a practical model can be in helping someone make the journey towards regaining control of their lives.  Do try it and share it.

Some books that helped me:

Alvin Hall: Your Money or your Life; You and Your Money; Money Magic and You-tube